Disclosure: I received one or more products or monetary composition for the exchange for my honest opinion. I only recommend product that I would use personally or believe would be a good fit with my readers. All opinions are 100 percent my own and may differ from yours. I am disclosing this in accordance with the Federal Trade Commission’s 16 CFR, Part 255: “Guides concerning the use of Endorsements and Testimonials in Advertising. 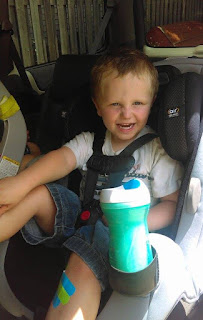 When having a baby, you always want to get what is best. For our first son, we chose an infant car seat for when he was first born. Which was great, until he out grew it. I thought, oh no big deal. We will pick out another one no problem. And then I started looking. My husband and I decided on one at the time, that has lasted less then a year. He already out grew it! So, I decided it was time to put a lot more research and time into finding the right car seat for our family. We just have had our second son, and I want to make sure that we are not continuously buying a new seat every six months to a year. 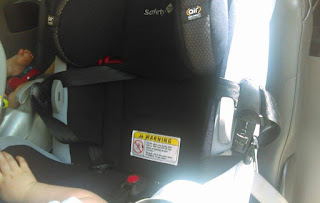 When I started looking into different car seats, I decided I wanted to make this the last car seat purchase that I could for my son. I have seen a few that grow with your child. Even my best friend has one for her son. The issue with hers is it is super heavy and bulky to move around. I came upon the Safety 1st Grow and Go EX Air 3 in 1 while shopping around. I picked it up, and it weighs significantly less then hers. Which was so nice, especially when we switch the car seats from one vehicle to another.

Taking this out of the box was so nice, Everything was already set up for an infant, as you can use this seat rear facing for children five to fifty pounds, and nineteen to forty nine inches long. There is so much padding to make sure your little ones are safe and still comfortable while traveling. Since I didn't need that for my three year old, I took those pads out. Which was much easier then I expected. Next, was getting the buckles in the correct spots. With a little looking, it took no time to figure out. The only issue I had was when a shoulder strap got away from my hand. It only took a minute to fish back out, which was great. I tend to normal have such issues with trying to get the strap placement correct.

Next, was actually fitting it in my mini van with my younger sons infant seat and base in the middle seat right next to it. My old car seat seems so small, so I thought this will never work. But, to my surprise even with two cupholders to hold my sons sippy and even a snack, there were no issues at all. I really love that the cup holders stay attached to the seat so I dont have to worry about them knocking off, or coming loose. Especially on our longer road trips. My son seems to love having a spot to set his sippy rather then having to hold on to it, or have it in between his legs. He tends to use the second cup holder as a spot to leave his little toy cars. Which saves so much time when getting in and out of the car.

Another feature I absolutely love on this car seat, there is a spot on each side to hold the straps so you are not trying to dig them out from behind your child when trying to strap them in. It saves so much time and hassle. I just make sure to have them set in the right spots before my son even gets out so that when we get back into the van he can start getting himself strapped in while I get his little brother in the car. Helping make him more independent, and helping me get things done more efficiently.

This car seat will work as a forward facing car seat from twenty two to sixty five pounds, and from twenty nine to forty nine inches long. Then you are able to with a little effort turn this into a high back booster seat. Which will work from forty pounds to one hundred pounds, and from forty three to fifty two inches tall. There are anchors for your car, or you are able to attach via a seat belt. The side is numbered to help you know where you need it to be set up so that it is sitting correctly in your vehicle. It is great that you can adjust the harness and headrest with a simple squeeze of a handle. I really thought that this would be much more complicated, but safety 1st seems to understand that as a parent you are doing a lot of things with one hand, and dont have much time with little ones to be messing around for a long period of time.