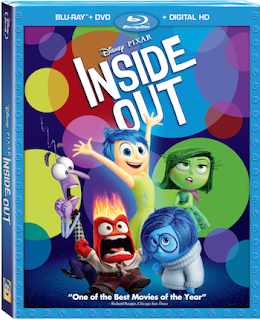 From the Imaginative Minds of Disney-Pixar Comes a
Major “Emotion” Picture Beyond Compare!

Along with an all-new animated short “Riley’s First Date?”
And an extensive line-up of bonus features

I am excited to share with you that Inside Out is finally out. This is a fun movie to watch with your kids and a great movie to add to your collection. I wasn't to sure when I heard about this movie but I was curious. My son did not want to watch this at first and it turned out to be one of his favorite movies and wanted to watch it several times after the first time. My daughter also enjoyed watching it. I would recommend this for a family movie night.

Here is a little bit about the movie.

SYNOPSIS: Do you ever look at someone and wonder what’s going on inside their head? Disney-Pixar’s “Inside Out” takes an exciting and hilarious journey into the mind to find the answer. Based in Headquarters, the control center of 11-year-old Riley’s mind, five emotions are hard at work, led by lighthearted optimist Joy. She strives to make sure Riley stays happy as she operates alongside fellow emotions Fear, Anger, Disgust and Sadness. It’s “an instant classic,” raves Richard Roeper, Chicago Sun-Times. Experience it like never before on Disney Blu-ray!

BONUS: Digital HD*, Blu-ray Combo Pack & Disney Movies Anywhere (DMA)
Overall this movie was amazing. I know my daughters favorite character was Joy and my sons favorite was Anger. I thought they were all creative and liked all the same. This was a fun film to watch with the kids. You can pick up your copy at any retail store near you or amazon.com