I recently wanted to do something special for my kiddos. One of their favorite places is Chuck E. Cheese of course "Where a kid can be a kid". Last Saturday we went to our local Chuck E. Cheese and I was surprised on how well our trip went. When we first walked in you could tell they where somewhat busy with kiddos running around. The staff welcomed us warmly and were very friendly. They helped us take our order and we were able to get a pizza, four drinks and 30 tokens from Chuck E Cheese. We also bought extra tokens and some wings!. They had a special spot for us to sit which was thoughtful. They introduced us to the game guys and to couple other that could help us if we needed help.

We decided to eat our food before we played games. I know one I set my two kiddos free I would never get them to sit down again. It did not take long to receive our pizza and wings. We took advantage of their pepperoni pizza with thin crust. My kiddos gobbled up the pizza right away. My son loved the wings and my dad did also. My daughter snatched the celery that game with the wings. They did include ranch sauce with the wings. That was a nice touch. 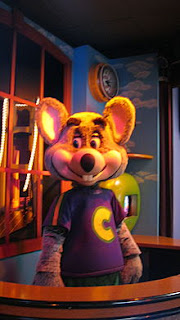 We split up in two groups. My dad and my daughter were in one group and my son and I were in another. I will say with one of my game I liked I think i broke the machine. I know I did not break it but it decided it needed a break. I found one of the game guys and he was really nice and gave me a few tokens for the problem. That was very nice. I had fun with the different game that we played. I  even played a shooting game with my son and had a blast. The game room was well controlled and the workers were super nice and very helpful. I even noticed a few times when the game guy was fixing the machines it would spit out tickets and he would give a lucky kid the tickets. The smile on their faces were priceless. It was a nice site to watch the kids tell their parents what happened.
After playing the games which were a total blast. We had to bags of tickets and tickets that Chuck E Cheese gave us previously. We turned them in the ticket machine. It took awhile to feed the machine all the tickets but that is to be expected. We had over 1100 tickets. We went to the prize counter and they were super helpful when we were looking through the prizes. You know how both kids wanted what they wanted and did not want anything else. My daughter picked out a little purse with make up in it and my son wanted a more expensive prize which was one of the warrior toys. I did not have enough tickets to get both. I like the option that they officer is you can actually buy the difference. It a penny for a ticket I believe which is nice if your short.

Overall I am impressed with the customer service from this location we visited. They were very nice. They also could have a conversation with you. One of the managers there had a token and said look their is a token on your head. My daughter loved that. They knew how to interact with children. I would go back to their location and would recommend them. This would make a great trip during the holiday season or purchase a gift card during the holiday for your youngster!!

P.S I will have more pictures to come stay tuned!