I am excited to share with you that Transformers: Robot In Disguise is coming to DVD. I personally like Transformers but I have a eight year old son who loves Transformers. When he saw that this DVD was coming out on DVD he was very excited and could not wait. Here is a little about the DVD.
The lure of TRANSFORMRES saga begins a new chapter as BUMBLEBEE and a team of AUTOBOT action heroes embark on a new mission to protect and save Earth from a new faction of DECEPTICONS. Hasbro Studios’ new top-rated animated series TRANSFORMERS: ROBOTS IN DISGUISE, which airs on Cartoon Network, is the latest installment of TRANSFORMERS franchise and builds on the lore of both the AUTOBOTS and DECEPTICONS. Featuring an all-new animation style, this new hit series is filled with exciting, action adventures and great humor for fans of all age.

Five action-packed TRANSFORMERS: ROBOTS IN DISGUISE adventures include:
Of course when my son watched this DVD he did not get up and he was totally glued to the television. He said he was different but he loved it! One of his favorite Transformers is Bumblebee so he even like the DVD more. This DVD was different but my son loves it and that what counts. If you have a Transformer fan out there this may be a good DVD to pick up for the holidays? You can preorder this dvd now and the info is listed below.

Are you looking for an educational toy for this upcoming holiday? Brackitz offers a variety of different educational sets for your child to ... 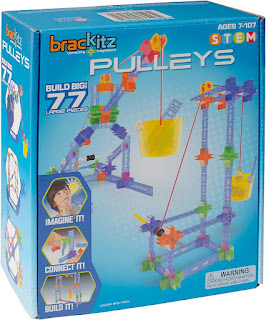