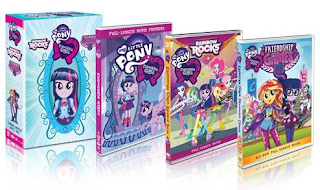 INCLUDING THE NEW FULL-LENGTH FILM
MY LITTLE PONY EQUESTRIA GIRLS: FRIENDSHIP GAMES
IN A 3-DVD SET PERFECT FOR THE HOLIDAYS
I know that I have a 5 year old girl and this series is perfect for and perfect stocking stuffer for the holidays. I believe that we already own all three DVD that come in this series already but if you don't this would be a perfect box set for your My Little Pony fan!!
Here is a little bit about this box set
Los Angeles, CA – Join Twilight Sparkle and her Canterlot High friends in three animated adventures! My Little Pony: Equestria Girls (Three Movie Gift Set), which includes the new full-length feature film, My Little Pony Equestria Girls: Friendship Games, will be released on October 13 in the U.S. and Canada from Shout! Kids, in collaboration with Hasbro Studios.  With a special lenticular cover that features a transforming Twilight Sparkle, the box set houses all three films released from theMy Little Pony: Equestria Girls canon, Equestria Girls, Rainbow Rocks and Friendship Games. Complete with bonus features including audio commentaries, animated shorts and deleted scenes from Friendship Games, this gift set is perfect for giving this holiday season.

Equestria Girls
When a crown is stolen from the Crystal Empire, Twilight Sparkle pursues the thief into an alternate world where she transforms into a teenage girl who must survive her biggest challenge yet…high school. With help from her new friends who remind her of Ponyville’s Applejack, Rarity, Rainbow Dash, Pinkie Pie and Fluttershy, she embarks upon a quest to find the crown and change the destiny of these two parallel worlds.

Rainbow Rocks
Canterlot High is hosting a musical showcase and Rainbow Dash, Applejack, Pinkie Pie, Rarity, and Fluttershy are going to be performing with their new band, The Rainbooms. A new girl group, The Dazzlings, arrive at CHS and convince everyone to turn the friendly showcase into a Battle of the Bands.Tensions mount and a reformed Sunset Shimmer realizes that the Dazzlings may not be ordinary girls and are after something far more sinister. The Rainbooms call on Princess Twilight to return to their world to help them perform a musical counter-spell so that they can win a battle that now determines the fate of the entire school.

Friendship Games
Canterlot High meets its rival school, Crystal Prep Academy, in a competition that’s a long-standing tradition — the Friendship Games. Sunset Shimmer is tasked with keeping magic out of the games to avoid the appearance of impropriety while she and her friends compete against Crystal Prep’s top students led by someone with an equal amount of interest in Equestrian magic — this world’s Twilight Sparkle.
I do have previous blog post on each DVD that is listed above. The three DVDs that are in this set my daughter loves. She is able to sit down and able to focus! She even brings her Build-A-Bear Ponies to watch with her. She told me that she loves the show and wants to watch more in her own words. I would defiantly consider picking up this box set for your My Little Pony fan for Christmas. The box set just came out yesterday and you will be able to find it at your local retailer or amazon.com