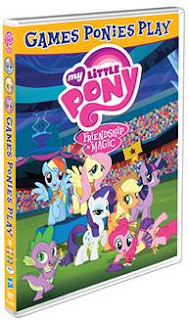 MY LITTLE PONY – FRIENDSHIP IS MAGIC: GAMES PONIES PLAY
IS COMING TO DVD SEPTEMBER 29!
Are you a huge My Little Pony fan like we are? My daughter is all about My Little Pony so she was excited to hear about My Little Pony coming out with a new DVD called Friendship is Magic Games Ponies Play.  This DVD is coming out alter this month!!
Here is a little bit about the DVD: Sportsmanship is put to the ultimate test in Equestria as your favorite Ponies - Twilight Sparkle, Applejack, Pinkie Pie, Rarity, Rainbow Dash, and Fluttershy -- prepare for the Games Ponies Play! Included are six awesome adventures that will teach you all about overcoming the challenges of competition through the magic of friendship. Will Spike be able to build up the courage to light the ceremonial Equestria Games torch? Who's the best athlete in Equestria? And will it matter, when true friendship is on the line? Find out!
My Little Pony – Friendship Is Magic: Games Ponies Play now available for pre-order at amazon.com, amazon.ca, and shoutkids.com.
My Little Pony – Friendship Is Magic: Games Ponies Play Episodes Include:
Fall Weather Friends
Games Ponies Play
Power Ponies
Equestria Games
Appleoosa’s Most Wanted
The Lost Treasure Of Griffonstone

My daughter loves this DVD and she had a lot of fund watching the Ponies Games. It was interesting to see what challenges arise and how the Ponies handled the situation. Don't miss this amazing DVD. IT will be out in local retailer stores soon!!