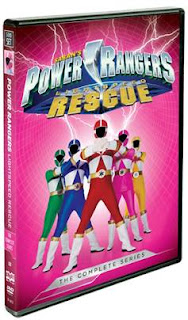 The Complete Series
Available in Stores Nationwide August 11th
From Shout! Factory
I don't know about your son but my son is very excited. One of his favorite series is Power Rangers. To be honest with you I can't keep track of all the different Power Ranger show that they have now a days. My son could not wait to receive his copy in the mail.
On August 11, 2015 join the Power Rangers as they battle the evil Diabolico when Shout! Factory releasesPower Rangers Lightspeed Rescue: The Complete Series, a 5-DVD box set that contains all 40 episodes of the iconic show’s eighth season.
After five thousand years of incarceration, the evil Diabolico and his treacherous army of demons have escaped their imprisonment, and will stop at nothing to destroy the community of Mariner Bay and its innocent citizens. The new Power Rangers, empowered with top-secret technology, are the planet’s only hope. Chosen for their expert skills, this unique team of five – a firefighter, an aquatics professional and a martial master, an accomplished aviator, an extreme sports enthusiast and a paramedic – is commissioned to defend Earth from the evil Diabolico and wage their battle from the safety of their high-tech underwater compound and weapons laboratory, the Lightspeed Aquabase. The stakes are high as these brave Lightspeed rescuers form Earth’s final line of defense.
After watching this series my son said it was awesome. He said he wanted to watch it again and again and again. I did have to regulate him and watch a few episodes at a time. It lasted for a few days. He really got into the episodes. Personally I have overdosed on Power Rangers. This is a great if you have a child who loves Power Rangers!! Buy it when it comes out August 11th!!