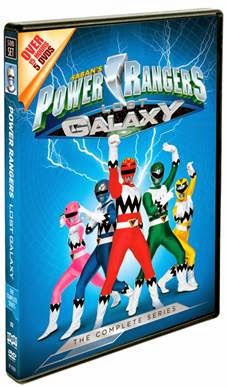 I am excited to share with you on March 10, 2014 Power Rangers Lost Galaxy: The Complete Series, a 5-DVD box set that contains all 45 episodes of the iconic show's seventh season is coming out. When seven year old son found out about Power Rangers Lost Galaxy: The Complete Series that is coming out he was excited. He said he was not sure if he had seen this series before, but was excited to be able to watch it.
About Power Rangers Lost Galaxy: The Complete Series:
The massive spaceship Terra Venture represents mankind's greatest accomplishment. The giant spacecraft hosts multiple habitat domes with diverse environments ranging from a lake to a mountain range - even a dome with a sprawling city inside - as it takes thousands of human pioneers deep into space to settle a new world. Along the way they are stalked by dangerous aliens led by the insect-like villain Scorpius and his daughter Trakeena. Rising to protect the colony ship and its many inhabitants, a team of Power Rangers from different walks of life unites to become the Galaxy Rangers.
Overall thoughts about Power Rangers Lost Galaxy: As a mother I do not really have opinion on Power Rangers. I personally can not keep track with all the different series of Power Rangers.  On the other hand my son loved this series. He told me it is different from the other series and he enjoyed this one a lot. This series has kept him entertained and he was able to watch it without getting bored.

You can find this DVD at your local retailer or amazon.com