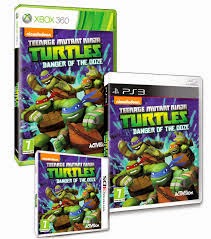 Are you looking for a special something for that gamer in your family for the holidays? Well I have a perfect game that will be a great stocking stuffer for the holidays. Activision recently came out with a new game called Teenage Mutant Ninja Turtles: Danger of the Ooze. This game is available on Xbox 360, PlayStation 3, Nintendo 3DS.

Game overview on Teenage Mutant Ninja Turtles: Danger of the Ooze: is a side scrolling action adventure video game featuring your four favorite Teenage Mutant Ninja Turtles- Leonardo, Donatello, Raphael and Michelangelo. The famous four are known to keep an eye out for trouble that is happening in New York City. This original title evolves the shell shocking experience with the new story beats tied to Nickelodeon's hit TV show, new combat mechanics, new environments to explore and several progression options. This game has several features.