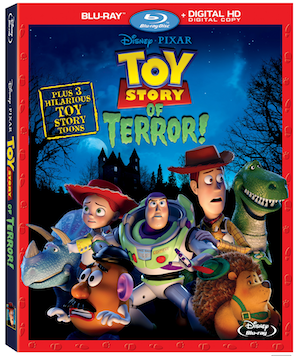 A little bit about Toy Story of Terror:

What starts out as an exciting road trip for the Toy Story gang takes an unexpected turn for the worse following a detour to a roadside motel. After Mr. Potato Head suddenly disappears, his friends find themselves caught up in a hilarious mystery that must be solved before they suffer the same fate in this thrilling Toy Story Of Terror!

My son and daughter seemed to enjoy Toy Story of Terror. My daughter was excited when she saw Jessie on TV. Jessie is her favorite one of the gang. My son was on his seat and excited to see if they found Mr. Potato Head. Although this movie was not to scary it make it adventures for the kids. I like how they knew how to go so far and not scare them. They made it fun and exciting. I would highly recommend this Blu ray for your children. Especially if they are fans of Toy Story they will love this one.

You will be able to find this on Blu-Ray on August 18th at amazon.com or your local retailer.