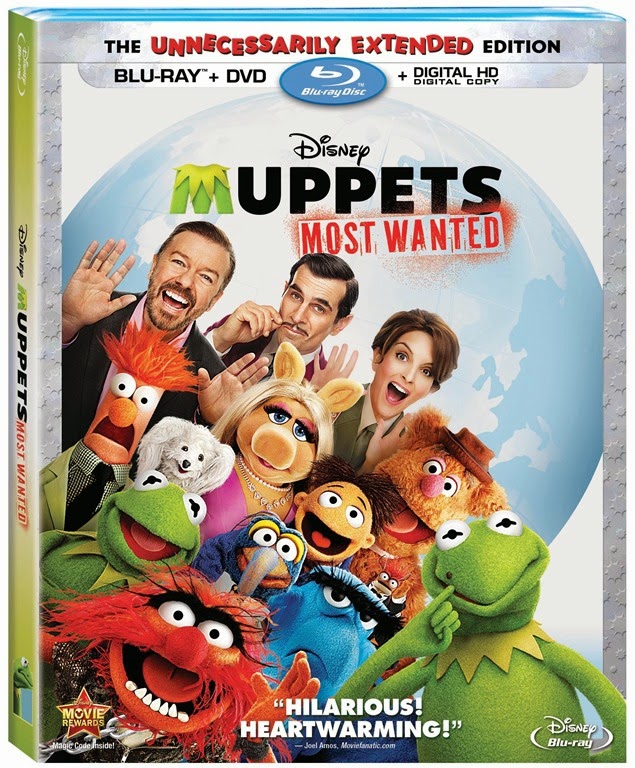 I know when I was a child growing up I was a huge fan of the Muppets. I remember watching the different Muppet movies with my family. I was excited when I heard about Disney's Muppets Most Wanted coming out on Blu-Ray and DVD I knew I had to share this film with my children.

A little bit about Disney's Muppets Most Wanted:
There is three versions of the movie original theatrical, extended and statelier & waldorf cut.

Two Frogs! One Pig! Intrigue! Music! Mayhem! Muppets! There's plenty of fun for the whole family as Kermit the Frog, Miss Piggy, Animal and the entire Muppets gang head out of a world tour. But Mayhem follows the Muppets, as they find themselves unwittingly entangled in an international crime caper. Now Kermit is behind bars at the mercy of prison warden Nadya ( Tina Fey), and the World's Number One Criminal, Constantine- a dead ringer for Kermit- has taken his place.

As Constantine and his dastardly sidekick Dominic (Ricky Gervais) plot the robber of the century, they are pursued by Sam Eagle and Interpol agent Jean Pierre Napoleon (Ty Burrell). Will Constantine get away with his nefarious scheme? Will Kermit escape in time to save the day? Packed with dozens of guest cameos, new songs and the most extended, most exclusive scenes not in theaters, Disney's Muppets Most Wanted is the most hilarious, most wanted Muppet movie ever.

When our family watched this movie it was different, but enjoyable and the family enjoyed watching the Muppets together. My son enjoyed this movie the most out of the whole family. He really like the fake Kermit and how he acted. He also like the song Kermit did about being number one. It was a cute movie. My children enjoyed the movie and the characters and that what counts. If your child is a fan of the Muppets I would recommend adding this one to your collection as well.

You can find this DVD at amazon.com or any local retailer that sells DVDs.