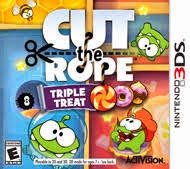 Last year my son got a Nintendo 3DS and he loves playing games on it. As a parent of a 6 year old I am very careful of what games my son plays on it. Recently we were given the chance to review a game called Cut the Rope: Triple Treat by Activision Publishing, Inc. This game is rated E for everyone and is rated by the ERSB.

Cut The Rope: Triple Treat game overview: Drawing from ZeptoLab's best-selling, Apple Design and BAFTA Award-winning movie franchise, Cut the Rope: Triple Treat is a single-player, physics-based puzzle game in an adorable, 3D package. Players must manipulate increasingly complex strings of touch-controlled obstacles in oder to feed Om Nom, a lovable, insatiable, green monster that arrives one day in need of a home. The title bundles together the first three major installments in the series- the original Cut the Rope, as well as two expansions, Cut the Rope: Experiments and Cut the Rope: Time Travel- with bonus content for hardcore Om Nom caretakers.

When my son tried this game out he told me that it was fun and it made him think. He played it for hours and kept him entertained. My son loves how there are so many new levels. When my family had to go in car and run and errand that was about an hour away. I had my son bring this game. He played non stop and the game did not bore him at all. This game is a lot of fun and anyone can play it. I honestly try to sneak some playing time, but that does not happen often.

If you are trying to find last minute Easter Basket fillers I would recommend picking up Cut The Rope: Triple Treat. You can find this game on the link below.