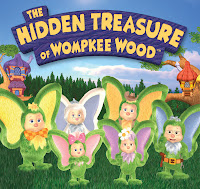 When I first saw Wompkees my first thoughts about Wompkees is what is a Wompkee? Wompkees are magical creatures that are furry, big eared and resembles like an elf creatures. Wompkees are very special creatures that has the ability to communicate with all beings and able to communicate with all animals in the world. There are several different Wompkees and each Wompkee represents a different personality trait. What my kids love is that each Wimple has a different personality trait and that no Wompkee is the same and the reside in a magical Wompkee wood.

My children were very excited when we opened up our Wompkee packaged. First we found three Wompkees characters. The first Wompkee we took out was Twig. Twig is about 7-8 inches tall.  My daughter fell in love with Twig right away. She is big and green with a cute little pink bow on top of her head. I personally like her big ears. Twig has big ears that helps her hear and they help her fly. When she goes to sleep she cover her eyes with her ears. Twig also likes to play peek a boo.  There is velcro on Twigs Ears where you can cover up her face. I really like that feature and think it is neat. Twig is also very very very soft.

Then I received two small Wompkees that are about 3 inch. I received Twig and Scout. Twig is the same as the bigger Twig but just smaller. The other difference is that she does not have velcro on her ears. The other Wompkee that I received was Scout. Scout was very cute and Scout ended up being my sons favorite. He has big ears also and a rubber face. What my son loves about Scout is that he has brown hat and backpack. Which he thought was really neat.

My children love DVDS and they were very excited to be able to watch The Hidden Treasure of Wompkee Wood.  Their are six main Wompkees and they are Gran, Twig, Hummer, Daisy, Scout and Buster. In an ancient Wompkee tale is that at one time they could speak the languages of all creatures on earth. This power came from a sacred glowing stone, entrusted to the Wompkees by the spirit of the wood. An evil witch from the forbidden cave came and stole their sacred glowing stone. The Wompkees could not communicate with other creatures, but only could communicate with their own Wompkees. Overtime the stone was forgotten. One day little Wompkees would find a way to bring back their Sacred Stone. The little Wompkees set out on an adventure to travel to the dark cave and find their sacred stone.

My children loved watching the adventure of the little Wompkees going to save the Sacred Crystal. This was a great DVD for my children because the Wompkees are great role models and they give a great message to little kids. While watching this DVD you could relate to the Wompkees. In this DVD you will notice that each Wompkee is faced with several challenges with teamwork with other Wompkees they will overcome the obstacles. This will help children learn working together will accomplish their goals.

I really enjoyed this DVD this would be one of my favorites for Christmas. It has the real meaning behind Christmas.  I think everyone can relate to Twig and her wish. I know that we all wish we could be like others in certain ways. It was great to watch Twig on her adventure to save the Christmas adventure.

Overall I would highly recommend Wompkees! I believe they give a positive message to children. I am always to try to find creative, morals, ethics behind toys or DVDs. Which I can proudly state that Wompkees does. Also your children would love the fun adventures that Wompkees have. You can find Wompkee products at their website below

** I received one or more products for review purposes only. My opinions are 100 percent my own**