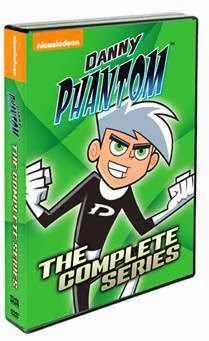 And you thought the hassles of everyday high school life were bad!

Meet Danny Fenton, a good-natured, ordinary 14-year-old kid with extraordinary powers. After an accident involving ‘Ghost Zone’ portal of his two highly eccentric ghost-hunting parents, Danny now has the half-ectoplasmic DNA of a ghost, giving him the ability to fight off the horrible spooks, specters and vengeful ghost hunters threatening our world! But before Danny can defeat anything, he must first learn to control his newfound powers with the help of his best friends, tech-head Tucker and self-proclaimed goth Sam.
In this Complete series you will get all three seasons of Danny Phantom! This set will include 10 DVD set feature all 53 original episodes that you may have seen on Nickelodeon.
My overall opinion of Danny Phantom Complete Series. My son and I have been a huge fan of Danny Phantom and since we do not have cable at the moment this is a great opportunity to still be able to enjoy Danny Phantom. This is a great deal if you are also a fan. You can get this complete set for under 30 dollars which is a steal. Majority of the episodes are appropriate for my son and he said it reminds him of comic books that he reads. There are a few scenes that we pass, but it is not a huge deal. I would highly recommend this series for kids 6 and up. My son enjoys this dvd set. He has not finished watching the whole complete series, but he is on his way to finishing it.
You can find this set out on DVD January 28th at your local video store or amazon.com

** I received this DVD free of charge in hope of me posting a review on my blog. I was not told how to write the review or received any other compensation for this post. This post is 100 percent my own opinion.**